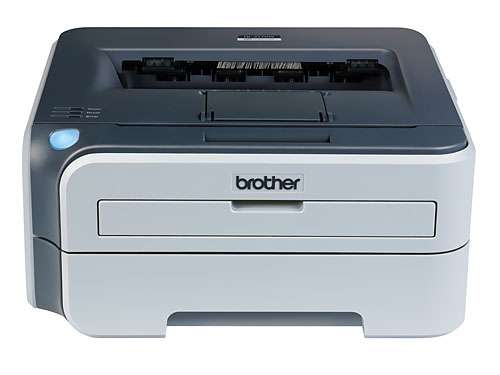 You may have a really nice printer that is good for churning out photos
and colourful graphics but you may feel a little reluctant to use the
printer for everyday printing of text documents. Brother may have a
printer that could solve that problem and for a price that won’t break
the bank (too much).

The Brother HL-2170W laser printer is a tiny laser printer compared to
ones we’ve seen in the past, but differentiates itself by having
wireless functionality. The theory is that you don’t have to have it
wired up to a network hub of switch, just tell it what your wireless
network is plus any WEP security codes and you are good to go. Although
setting up wireless printing was a traumatic experience.

We set this up in our test lab and tried to follow the instructions,
but after various attempts at trying to follow the set-up manual, we
drew a blank. Initially we gave up and installed the printer drivers
and a normal USB connection just to look at the print quality (more on
that later).

Like we said following the instructions didn’t seem to get us anywhere,
whether we tried to set up wireless or wired printing. No matter what
we did, the printer would not print for us. Five hours in and we did
what any journalist would do and called the PR company.

We have to admit that the average customer would not have this kind of
access, so we hope that anyone having a tough time with setting this up
would get a reasonable helping hand with making this printer work.
Anyway, back to setting this printer up the easy way, using your
contacts to get help quicker. As quick as a flash, the PR company
managed to get hold of someone from Brother to show us what to do.
After talking with this man we were up and running with wireless
printing – although it has to be said what this person said bore little
resemblance to what is printed on the instruction manual, but at least
he made perfect sense and more importantly sorted out our wireless
printing problems.

With that little incident out of the way, we could look at the printer
properly. The machine is quite a small thing – a Kylie among laser
printers – 17.05cm tall, 36.8cm wide, weighing 6.8kg. It can hold
around 250 sheets of paper, enough for the average home user. It also
sports a manual feed paper slot to handle an range of different paper
sizes
including Letter, Legal, Executive, A4, A5, A6, B5, B6, and envelopes.
It also boasts 32MB of internal memory and a print speed of 22 pages
per minute.

We loaded it with quite posh paper. While it managed to print out black
and white documents most of the time we did get one paper jam quite
quickly. Otherwise when you press print on your computer, it still
managed to print quite quickly over the wireless network. Proper laser
printer paper fared a lot better. The quality of printed documents is about what you’d expect from a  monochrome printer.

The control panel very simple indeed. It features one great big blue
"Go" button and three small LEDs for
toner, drum, and error status. Other than that, not much else. It’s
styling probably won’t win many awards either. But for day to day
printing with the right laser printer paper, the price (around £150)  makes this a
bargain. Just needs the writer of manual to be given a swift talking to.