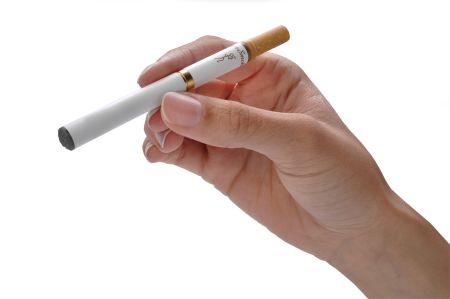 I sat smoking on the tube last night. I did. I also sit here, in this non-smoking environment, smoking. But whilst I get stares, no one can tell me to stop because actually I’m not smoking!

Supersmoker is an ingenious idea that means smokers can get that hit of nicotine, without the 50 or so nasty chemicals that come with a normal cigarette. And it doesn’t actively push you to give up smoking – so no lecture either!

OK, so it’s a bit heavier than a regular fag (you can’t have the rock star fag-drooping-from-lip pose). And yes it’s bigger than a ‘normal’ cigarette, but hey, it’s not a cigarette, in the same way as I’m not a natural pink head – so why worry about the lie?

It also isn’t as strong – the strongest of the four different ‘filter heads’ being alike to a Marlboro Light – but it’s much cheaper and you can enjoy the company of friends without having to go outside for a soaking from the great British weather.

Now the science bit, the Supersmoker contains no tobacco (see, it’s almost good for you!) and doesn’t produce smoke. Instead those clever boffins have fitted a micro chip and harmless liquid that turns to vapour when the user inhales, then rewards you with a nice hit of nicotine – genius! You will get frowns, because from a distance it looks like you’re breaking the law. But no fines here, just a smirk for the bouncer!

It retails from £79, with extra filters at £7.95 for six. A version that’s got less chance of causing an argument, thanks to its funky blue ‘cherry’ rather than the red glowing end, is also available now.

Overall, the SuperSmoker works out to be kinder to your wallet as well as your lungs, so as a smoker it’s not a bad little gadget. In fact, you could say it’s smokin’…