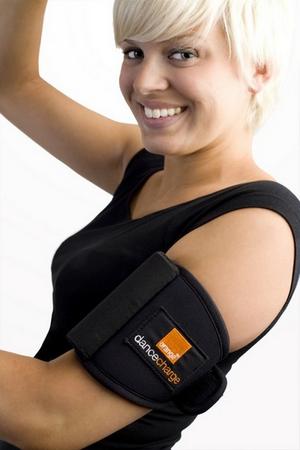 We at Absolute Gadget love our mobiles and we love heading off to walk
around 200 thousand tonnes of mud that is sometimes a music festival
called Glastonbury. But what to do when you mobile runs out of juice
and your tent doesn’t have an electrical socket. Orange has the answer – start dancing!

Or more accurately, the mobile phone company is trailing a new device
that you wear on your arm. Called "Dance Charge", the gadget fits
around your arm like a bracelet and its collections of magnets and and
weights move about to produce electircal current that is stored in a
battery that you can then connect to your phone to charge it up, long
enough to phone your mates to tell them that you have just seen a bunch of people walking around in multicoloured catsuits.

The device itself is about the weight of a mobile phone and the size of
a deck of cards. The Dance Charge unit comes with an elasticated,
black, neoprene
strap with velcro attachments which is attached over the wearer’s arm.
It was co-devloped with eco-company Gotwind
(yes, normally after eating pork!). The fully-working prototypes will
be handed out to testers at the festival and apparently some of them
will come back to Orange afterwards.

"We wanted to create a fun, engaging and interactive product which would
encourage users to have a laugh while charging their mobile phone and
at the same time test out a new energy efficient charging prototype," said Hattie Magee, Head of Partnerships at Orange UK.

Orange also will have in its tent of Orange goodness and interactive
Dance Charging Man who will help recharge mobile phones during the
festival by dancing a lot.