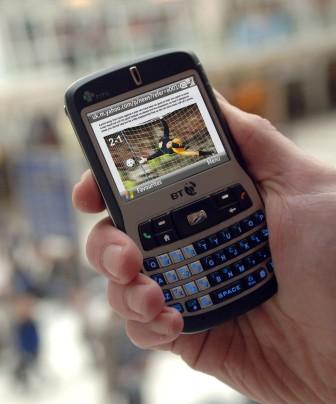 It would seem a bit weird that BT would spend money on inviting journalists to pop up to the BT
Tower to see a mobile phone that has been out for over a year, but it
appears it takes that long to build a good service around it.

As reported by Absolute Gadget some time ago, BT’s new Anywhere service offers customers the opportunity to access the internet not only at home but on the move. Basically it is giving you a smartphone with minutes and megabytes to access the mobile online world.

So after a little while is it worth the extra cost on top of your broadband?

The phone that you get is the HTC S620 (sometimes know as Excalibur). It runs a Windows Mobile OS but BT decided to re-skin
the interface (I think they said to improve the user experience – which
some people would interpret as "the interface is terrible let’s change
it!")

The phone does take a while to starts up, running running the BT Logo and the Window Mobile logo (and I think the HTC one as well). But you do get the much more pleasant looking BT interface. Setting involves typing in your BT
Yahoo email details. And you can also input other email addresses that
you have (such as the superior gmail). Accessing they email accounts is
relatively easy from the interface and it does let you know when a new
email have come through.

{mospagebreak}When you do
access your emails, most of the time it will show you a snippet of the
email and a message telling you that the rest of the message will be
retrieved next time you send and receive. Choosing the send/receive
option appears to have very little effect on getting the rest of the
message, as onoccasion, the message still only displays the snippet.

Web
browsing is done through the mobile version of internet explorer. This
software, while good at displaying web pages tailored especially for
mobile phones, fails badly at rendering normal web pages. (unlike
Nokia, Blackberry and iPhone smartphones that manage to display these
in a visuallypleasant and workable manner). For example, if you was to read this review on the Windows Mobile smartphone, it simply looks awful.

Making calls is reasonably ok.
The keypad is big enough for our fat fingers to dial a number
reasonably quickly. The best thing about calls is that you can sync
really well with your Outlook contacts.

Call
quality is good and the phone never dropped any calls that we made and
we could hear the person on the other end of the line well.

If you are like us, you leave things on like Wifi, GPRS and Bluetooth on all the time. Unfortunately, all these have a detrimental effect on the battery life and by the end of the day the phone is crying out to be recharged.

The
phone service costs an extra £5 a month and you get 50 cross network
minutes, 50 texts and 10MB of data (not really enough). But in sight of
aBT Openzone Wifi access point, you can make free calls and surf the internet to your heart’s content.

{mospagebreak}It’s a reasonable service for those that have never had a smartphone
or a blackberry before, but those of us that have experienced what
smartphones are capable of, may be a little disappointed. WhileBT have
gone to the trouble of putting together a good service around the phone
and a new interface, maybe it should have considered pairing the
service with a Blackberry or even an iPhone. That would make much more sense to us.

BT to give away Home Hub