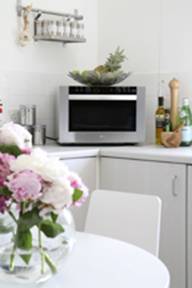 Microwave
ovens that are also proper ovens are two a penny nowadays. So LG has
taken it upon itself to go not just one but two better with the LG SolarCUBE that has four
independent heat sources that it claims with cook you food much faster
than anything else and more nutritiously.

The LG SolarCUBE itself is much bigger than most microwave (527 x 363 x 472mm – 26kg in weight),
barring those big ones you can get for industrial kitchens and so did
take up a lot of space in our compact kitchen. Although no doubt LG
would say that because it combines so many different functions in one
box we could probably do away with some our of other bits of kitchen.

None
the less, for the money you get a 1900W grill, a 2200W convection oven
and a 700W microwave.  Using it is simple enough, once you get over the
passable, almost humorous English translations  that are contained
within the instruction manual. As the machine is quite big you luckily
get around 32 litres of capacity inside (so a Christmas turkey can be
fitted in without too much of a problem).

It
also has three racks so you can put in a few trays of cake should you
so wish. The controls on the outside are the dial ones so setting it up
to work involves turning the knobs around until you get the type of
cooking then pressing a button and then twisting another knob to set
the temperature setting and the cooking time. A couple ofLEDs tell you
the type of cooking, the time and the power of the setting. This can
take a while to get used to as we found sometimes that we chose the
wrong type of cooking or set the power too high or the cooking time too
short. Continued…{mospagebreak}As with most, if not all combo
cooking machines, there is not turntable to put your food on. Using the
microwave on its own was a minor disappointment. With just 700W this is
a little underpowered for our liking (we are used to microwaves with a
much higher power setting). But its saving grace is its combo cooking.
Sticking in a couple of potatoes from raw can produce really good,
crispy jacket potatoes in around 20 minutes.

As
for it being more nutritious, it would be hard for us to tell but the
jacket potatoes had a pleasant taste to them, so the oven didn’t ruin
them, which is always a good point in an oven’s favour.

Fish
fingers also did well in our test. Although we learnt it was better not
to use the rack in the tray as the fish fingers would sag in the gaps
when cooked from frozen. Rice cooked well in the oven although as the
microwave was a little underpowered, this took a little longer to cook
through.

If you are looking for a combi-microwave oven/grill then this has to be on anyone’s short list. Prices are around £275.