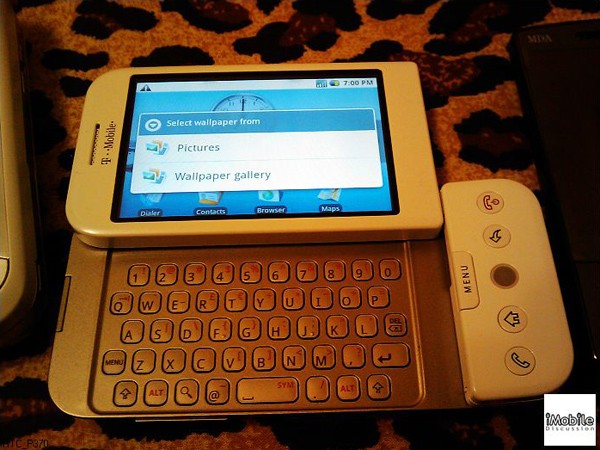 At Absolute Gadget, we have been almost giddy with excitement over the
launch of the HTC Dream and more importantly the fact that Google’s new
open source Android mobile phone operating system will be running on
it. So we were keen to hear that a Taiwanese mobile phone forum managed to get some proper pictures of the phone that will surely rival the Apple iPhone.

The pictures from website imobile.tw appear to confirm that T-Mobile
will launch the handset, due in October, and from the looks of it,
will feature a slide-out qwerty keyboard. It is difficult to tell from
the pics if the the device has a touch screen, but it would surely be
madness to not have one?

It is also thought that the G1 will come with 3G, 802.11g WiFi,
Bluetooth connectivity. It is also rumoured to have a Qualcomm
processor, 384MB of Internal RAM and ROM memory, a 1GB microSD card and a
flash-less 3.1 megapixel camera.

It alslo appears that behind the scenes Google has been working on
getting lots of apps ready for the phone for launch day, which is set
to put the number of apps available for the iPhone in the shade.

We are really looking forward to this new G1 phone and stay on this website to see the review.

Pictures on next page…. {mospagebreak}