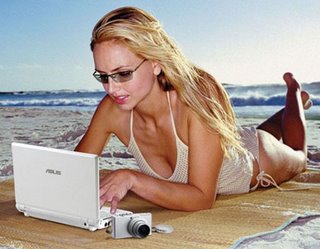 Despite that you can’t type on a keyboard properly when your hands are
smeared with suntan lotion and you can’t really see the screen too well
when the sun is high in the sky, Brits abroad want nothing better than
to get onto Facebook, presumably to tell their mates they’re on
holiday. Well that’s according to a new T-Mobile survey.

Another 44 percent think that its a good idea to surf t’internet in the
garden (please see above remarks on sunshine and laptop screens).
Twenty percent want Facebook on the beach (admittedly we have reviewed
the Blackberry and sent pictures of us on the Norfolk Broads – we are
sad).

Eight percent wanted the internet at the pub (which is handy in a pub
quiz – especially when the quizmaster thinks that the Sheriff of
Nottingham in Disney’s Robin Hood is a snake and you can point out that
was Sir Hiss!)

The mobile operator said that mobile broadband is experiencing a
massive uptake and is set to overtake fixed-line broadban in the next
couple of years.

"Mobile broadband has reached a tipping point and is now hitting the
mainstream", says Richard Warmsley, head of internet and entertainment
services at T-Mobile. "Consumers are used to taking their laptops out
and about with them and they expect to be connected – whether that’s in
the garden, at the office or in the park."