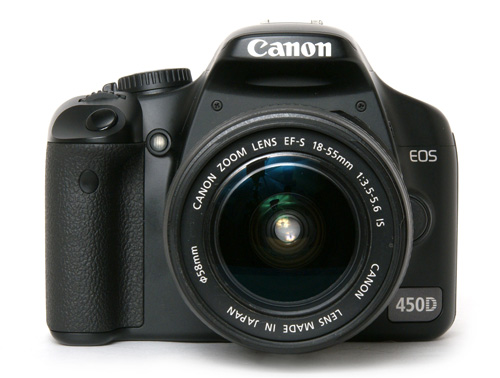 Digital SLR camera are getting more and more popular and it’s not hard
to see the attraction. Basically, they have all the functions of a
normal professional camera for those that fancy themselves as a bit of
a David Bailey plus some extra gimzos to help those who just want to
take a good picture without it blurring and add to the mix the fact you
can take the memory card out and print of thousand of pictures on your
printer without going anywhere near a chemist makes them a surefire hit.

Canon has been leading this revolution in photography with is mid-range
of cameras. In 2003 it launched the acclaimed 300D before storming the
world with its successors, the 350D and the 400D. With nearly 50
percent of the market it wouldn’t be too long before the rivals caught
on and caught up. Pentax, Olympus, Sony and Nikon have all responded
with new cameras eager to tempt potential customers to part with their
hard-earned cash. So it wouldn’t take too long before Canon had to
fight back with a new camera.

The 450D was launched earlier in the year in order to compete better
against the rival Sony A200, Nikon D60 and the Olympus E-420. It
features a 12.2-megapixel CMOS sensor, a larger 3-inch monitor with
Live View mode, nine-point AF system and 3.5fps continuous shooting.

It would be easy to think that the 450D is just a 400D with 50 added to
the number, but you would be wrong. While it has many of the features
and components of the 400D it now sports a new DIGIC III processor as
well as a new nine point wide area AF systems and re-designed sensor.

Not only that, when you take the camera in your hand it is a little
lighter than the 400D, 35g lighter to be precise. as well as it
measuring 128.8 x 97.5 x 61.9 mm, the 450D is 50g lighter than Sony’s
A200. It would be easy to say that the construction is gossamer in
places but it belies a ruggedness which should stand up to day-to-day
use. {mospagebreak}As the body is quite small, those with big hands will find it slightly
probematical when in use as the handgrip is small. That said, anyone
who is upgrading from a previous version will feel at home with the
intuitive controls.

With most modern digital SLRs, there is an integrated sensor cleaning
system, which uses anti-static materials and a vibrating filter layer
to get rid of dust particles. Not that any contaminations were found
during testing.

On the back, the large screen has meant some buttons being put
elsewhere. New to this model is the Picture Style button. This button
allows the user to customising the image, with seven pre-set settings
and two
user-defined ones. The photographer can adjust contrast, saturation,
sharpness and colour
tone and there is remarkable amount of control for each setting. Using
these settings was easy.

As usual the top dial has a wide range of shooting choices from manual
to automatic and functions that would normally be found on compact
cameras. Aperture setting and shutter speeds are changed by the single
data entry wheel located just above the shutter button.

On the camera’s rear is the large LCD screen. With a 230,000 pixel
resolution it boasts a wide viewing angle and ample
contrast. The screen also has a "Live View" feature, which has been
seen on Olympus cameras for some time. But this doesn’t appear to be as
good as a similar feature found on the Sony Alpha A350. When activated,
the shutter goes up and switches on the image sensor. This means that
the image sensor can’t be used and so the camera has to then use a
secondary contrast-detection AF system. This isn’t as effective in
low-light conditions or in motion shots.

That said, the camera does take some really superb pictures with the
standard 18-55mm f/3.5-5.6 IS lens, but a better lens would improve
results. When in continuous mode, the camera can shoot 3.5 pictures a
second making it one for use in high-speed action shots. In single-shot
mode, the camera has no lag (as long as you use a decent flash memory
card)

{mospagebreak}The camera cost around £440 (body only) or £500 with an 18-55mm
image-stabilised lens. With cheaper snappers on the market, you might
wonder if Canon can hold onto its lead when other similar-spec’d
cameras are going for far less. But, it is still a superb camera and
well worth its (slightly) expensive price tag.