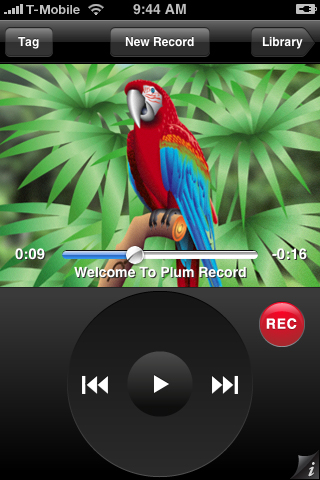 Plum Amazing has come up with an application that turns your iPhone into a digital audio recorder and tags sound files with photos and text. Not too much thought needed on the name though, as the company has plumped for Plum Record.

Plum Record is the company’s second iPhone application, and Plum Amazing reckons it is ideal to capture all the interesting and important sounds in our lives.

“Wouldn’t it be nice to record them conveniently on your ever present cell phone? Now with Plum Record and the Apple iPhone you can,” an official statement said.

As we mentioned, sounds can be tagged with photos and text, with the possibility to add multiple tags at different locations in a sound file.

These tags can then act like bookmarks allowing you to jump to different sections of the sound file instantly.

Once you have your sounds you can transfer them using the free Plum Record Server for the Mac, available on the company’s website. Windows and Linux versions are “coming soon”.

The feature list includes:
* Record, pause, continue, rewind easily using familiar controls and a beautiful interface.
* Record secs, minutes or hours at a time. See elapsed time and time remaining.
* A familiar scroll wheel for interface and controls.
* Files named automatically, with the ability to rename sound files easily.
* Library to keep sounds in and arrange by dragging into folders.
* Create hot tagged (coloured) folders for sounds.
* Folders and sounds can be selected and deleted or rearranged by dragging.
* Tag sounds quickly with multiple photos or instances of text.
* Easy to use and view even outdoors.
* Plum Record Server to transfer even big files to your Mac and soon Win and Linux.
* Works with larger interface in rotated mode.
* Choose the sampling rate for high or lower res (and size) files.
* Change the skin/interface for recording.
* Change files recorded on the iPhone to other formats like WAV, MP3, MP4, AAC, 3GP, AC3, AIFC, AIFF, AMR, Next/Sun, Sound Designer II, 3GPP2, etc.

Plum Record costs $5 and is now available in the iTunes App Store in English, German, Spanish and French.

Could 3G iPhone be on its way?