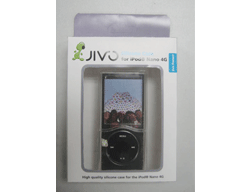 As the Apple website gets ready for its theatrical temporary closure
tonight in preparation for the company’s "Let’s Rock" event, one online
retailer appears to have jumped the gun a little with pictures that
will give us a reasonable idea of what to expect from the new iPod nano
4G.

Pictures on the Easyishop website
show a case for the new mp3 player from manufacturer Jivo. Costing
£19.99, the case is a clear hard plastic construct with a non-slip
surface.

Of course, a lot of people in the media have questioned whether these
pictures are real or not, as on one of the pages it said that the case
is also compatible with the much larger iPhone.

The picture seems to suggest that the new media player is more
elongated than the previous nano. Also, rumours talk of an iPhone
nano which will feature a touchscreen and come in orange.

Other news surrounding the "Let’s Rock" event points to a refresh of the MacBook line and an update to iTunes.

Kevin Rose of Digg fame has blogs about the new iPod nano and even has leaked iPod nano pictures on his website. He said that there will also be significant price cuts to the iPod range to distance itself from the iPhone.

We’re off down the Apple store tomorrow!