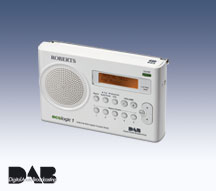 Portable
DAB radios aren’t known for their green credentials, so veteran
UK manufacturers Roberts Radio (the people behind the
you’d-recognise-it-if-you-saw-it Revival model) has reason to
crow about its new range of sets, designed to push batteries harder
than the Duracell bunny.

The
ecologic 1 and ecologic 2 both offer built-in battery chargers, so
they automatically fill them little metal sticks with delicious
electricity when plugged in the mains. They’re otherwise
pretty similar in terms of abilities (DAB/FM RDS, auto time set, 10
station presets, etc.) but the former distinguishes itself by being
just 160mmx105mmx35mm – the sort of size you’d expect a
personal radio to be. The little show-off!

The
ecologic 3, meanwhile, has managed to squeeze 120 hours of life out
of a battery – a bit better than the average DAB effort of 25
hours, to say the least. But the master is its big brother the
Gemini 21, offering a whacking 150 hours of life for your pennies
(7999 of them for the last, knock a tenner off each time as you’re
going back through the list for the other prices).

We look
forward to Roberts announcing next week that its worked out
how to make a single lump of coal burn for three hundred years and
discovered a cure for cancer during their coffee break.