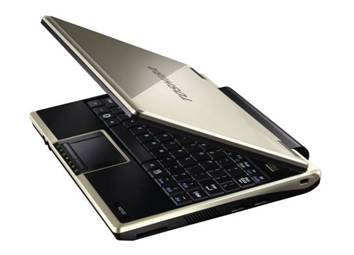 Okay, we know there’s
more than two OSs out there, but there’s only two that matter. And with
their entry into the growing netbook market, Toshiba are looking to seduce both Windows and Linux users.

The
Japanese giants announced their fancypants new NB100 earlier today. One
version comes with Ubuntu 8.04 (preconfigured with OpenOffice 2.4), and
the other with XP Home (with MS Works 8.5 and Office Trial slapped in).

So they like it both ways over at Toshiba (fnarr fnarr), but
how does their equipment hold up (fnarr fnarr fnarr)? Well, the stats
are certainly nowt to be sniffed at. Power comes from the new Intel
Atom N270, there’s up to a gig of RAM and 120 gigs of hard drive, a
pleasingly hefty 8.9" widescreen display (1024×600), a 0.3MP camera and
802.11 b/g WiFi. The whole caboodle weighs less than a kilo, and some
nifty engineering with that LED display results in nearly four hours of
battery life.

And just as a nice finishing touch, how would
sir or madam care for a choice of colours? Cosmic Black, Champagne Gold
and Bright Silver as you fancy. (We think there’s a real gap in the
market for a Vomit Green or Mouldy Apple Brown, but that’s just us.)

Sadly,
we don’t have our own NB100 to play with, so we can’t tell you if the
finished product is as good as it sounds on paper. You’ll just have to
wait until the official launch at the end of next month.