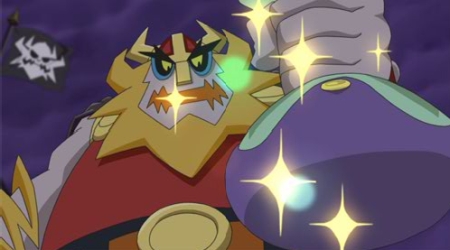 Talk about an old-school blast from the past. And even though that nine-word first sentence already puts the cliché count at two, there really is no other way to describe the nostalgic fun of this 2D platformer. Not that Nintendo hasn’t, ahem, shaken things up a little bit.

The story, which is played out for you in an opening mini-movie, sees nose-picking, garlic smelling Wario pop off to a new world to save a kidnapped princess. OK, not really. Wario’s self-serving alter-ego is actually more interested in the bottomless bag of gold that has been snaffled by the pirate king who holds her captive.

Once the cartoony exposition is out of the way, it’s time to get down to business. Things don’t begin brilliantly – there’s always a slight feeling of disappointment when you start a new game and are asked to turn the Wiimote on its side and use it like a PS3 or Xbox 360 controller.

Naturally, Nintendo has thrown in a few additions to use the Wii’s special qualities and push things on from a simple jump and smash adventure. Land on your enemies heads and they’ll be stunned, allowing you to pick them up. Not only can you then throw them as a weapon (great for destroying high up blocks), but you can shake the Wiimote first to empty any treasure or other goodies they might have on them.

The same shake movement also sets off Wario’s best attack move. This Hulk-style thunder crash into the ground is powerful enough to stun every enemy on the screen in a single hit. It’ll also shift massive blocks to let you pass or lift whole buildings higher to allow you to reach extra treasure.

Playability is increased thanks to mini goals placed within each level. You may need to find a secret item, gain a set amount of coins or escape to the exit within a certain time to tick these off. It’s unlikely you’ll complete every goal the first time through unless you’re a gaming god, so it’s worth going back over levels to rack up the passes and unlock bonus items.

Goals-wise, the format is the same as the early Mario games, although that’s no bad thing given how addictive they are. With five worlds (and therefore five end-of-world bosses) to conquer before you can make it to the big showdown, you won’t be done with this in just a few hours. That’s thanks to a game design that makes you use your brain as well as Wario’s brawn to figure out how to get around and get the most out of each area.

Overall, this isn’t the most innovative game ever to hit the Wii and probably won’t hold the interest of those non-traditional gamers who prefer Wii Sports, Wii Fit and Sonic & Mario At The Olympic Games. However, regular gamers will find themselves once again jumping from platform to platform as the wee small hours (or should that be Wii small hours?) roll around.

New PSP and bigger PS3 on the way