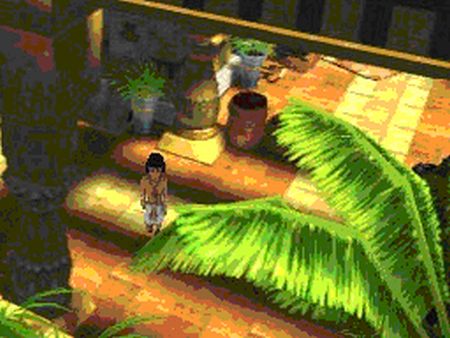 Ah, the point-and-click adventure. Look at PC gaming 15 years ago and you’d have seen an improbable amount of the beggars (Full Throttle, Day of the Tentacle, Sam and Max, and of course the legendary Monkey Island series) flowing out of LucasArts’ studios.  But then games started gettin’ all fancy, and it looked like the point-and-clicker, with its simple interface, heavy reliance on sharp scripts, and baffling “use baby on chainsaw” logic, was dead. Then came the DS, and people realised the genre could live again…

So you point, you click, you combine things with things, you use the ol’ noodle, you laugh at the jokes. Sounds just the thing for a 10-minute head-scratcher on the bus to work, right? Well…

Ankh is not a great game. An agreeable one, certainly. The puzzles are fairly well thought out, using a mix of the genre’s typical weird logic and, more pleasingly, some actual smarts. The script isn’t hilarious – in some places it’s downright cringeworthy – but it has its moments (usually when cheerfully demolishing the fourth wall, as in the above-mentioned conversation with a pair of rubbish assassins who take the time to explain the game’s mechanics). The world is quite pretty and detailed to look at, although the character design has a rounded, rather ugly look. If this is your sort of thing, then the PC version’s probably worth a punt.

But the DS version? It’s poor by comparison. Shrinking the lush PC screens to Nintendo’s titchy handheld means you just can’t see what you’re doing. Things that would clearly have stood out in the original are small, muddy and not obviously something you can interact with. The result is that you spend the whole time tapping at everything on screen, looking for something you can use. And that means you have to turn the sound off, as otherwise our hero Assil’s constant comment, “It looks like that doesn’t work here,” will drive you completely mad.

Having said that, once you do get used to the concept of having to take extra care with literally everything to be seen, it’s not a game-killer. A patient gamer (and those who play point-and-clickers are pretty much patient by default) should still get a decent amount of enjoyment out of this.

Unfortunately, our review ended at the beginning of the second chapter, where poor old Assil finds himself stuck in prison and we found ourselves simply unable to get out. A quick reference to an online walkthrough declares “combine coathanger with wine bottle”.  Did it work? No. Did literally any other combination of item used with anything on screen (it was only a small room, with a small inventory, it didn’t take long) work? Nope. Hopefully, this has been spotted and fixed before retail, but our Assil is due to remain stuck in that dungeon forever.

So, Ankh. PC version? Probably worth a whirl. DS version? Irritating, but bearable. Presuming the bug has been fixed for the retail version, our rating below stands.