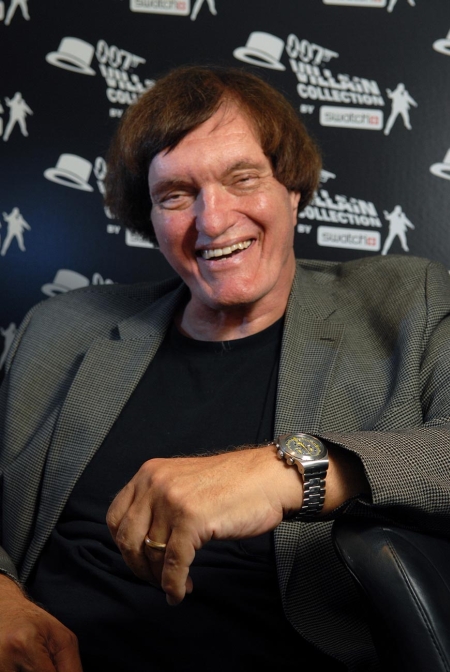 Absolute Gadget spoke to the Bond villain of all Bond villains – Richard Kiel, AKA the metal-mouthed Jaws – who has recently been immortalised in Swatch’s Bond Villain 22-watch collection.

Absolute Gadget: How tall are you in real life?
Richard Kiel: Seven-two.

And they’ve made a Swatch watch in the image of your James Bond character Jaws…
It’s quite a lovely watch. It’s very large and it has teeth in the band. It’s quite nice actually, it’s very subtle. And it fits me really well, it’s a real man’s watch.

Is that a nice tribute?
Yeah, it is. I had a Jaws figure in a presentation box made for Moonraker and one from the Twilight Zone as well. So it’s kind of neat. The grandkids love having them and my oldest son got one of the watches too. I like the combination because Bond’s been around for 45 years and the Swatch watch company has been around for 25 years and like Bond is hugely successful. They’ve made a third of a billion watches, all made in Switzerland, so it’s a good product.

Do you have any particular favourite Bond gadgets?
Well, I love the underwater car – the Lotus that went down in the water. That’s a classic. It was bigger than life. And my little boy at the time was almost two and he’s the little boy on the beach that points to the car and says, ‘Oh my God, there’s a car coming out of the water!’ He doesn’t remember that because he was only two years old, but I think it’s kind of fun. It’s nice when you can make that happen.

The first set of Bond films are about to come out on Blu-ray, have you converted to high definition yet?
I’ve heard about Blu-ray but I haven’t seen it. It sounds exciting. Six years ago I had one of the first 65-inch high-definition televisions. And my younger son pestered the cable company and we were the very first family in a city of 600,000 people to have the high resolution box. And I watched as all of the networks became high-definition – ESPN and so on. And my kids got the surround sound speakers and installed them so I’m looking forward to Blu-ray. What’s different about it?

It’s just really, really sharp so it’s getting closer to the quality of the cinema experience…
Years ago the video cameras didn’t have the depth of field – if they were on a person, the stuff in the background was all blurry. And I noticed today that when I watch a football game in high definition you can see the people in the stands really clearly. It’s like real life. I enjoy watching some of these nature programs where they have helicopters flying over, it’s so picturesque and beautiful, so Blu-ray sounds like it would actually seem like being there.

Are you a gadget person?
I’m conservative with my money so I’m not a big gadget person. I got my last cellphone because it has a bigger numeral pad. My son and his wife both have the new Apple iPhone and I really like it but I’m going to wait until my contract is up before I get one. [Laughs] The bigger numeral pad is what made me buy this particular phone because I have such a hard time hitting the numbers I have to use a stylus. It’s kind of hard to do while you’re driving.

They’ve banned driving while using a cellphone in the UK…
In California they have a law that you can’t hold a cell phone to your ear and drive – you’ll get a ticket. But I have a thing called Bluetooth BlueAnt that goes up on my visor. It’s really good in that it filters out all of the motor sounds and the wind sounds and makes the voice very clear. It doesn’t sound echoey or anything. My wife has a BMW Z4 and it has a built-in one and it doesn’t work at all. But she doesn’t want to put this thing on her visor, she still struggles with that. But I think it’s just a perfect system that works really well. You just reach up and push the button and it asks for a command and you tell it, ‘Call Henry’ or ‘Call George’ and it does it.

Swatch has released 22 watches based on Bond villains – including Richard Kiel’s Jaws – ranging in price from £32.50 to £125.