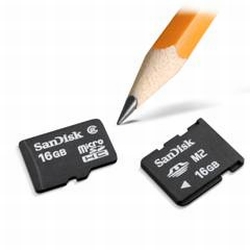 SanDisk has been urging us to wake up our phones for ages now. And with a 16GB memory card on the way, you’ve got no excuse for not cramming your handset full of music and movies…

Yes, a whopping 16GB will be available to anyone with a microSDHC or M2 slot in their phone come October. The “world’s largest storage capacity for mobile phones” will cost £45 excluding VAT for the microSDHC version, with the Sony Ericsson version costing around £60 plus VAT.

“In addition to the mobile phone, consumers can use the 16GB microSDHC card in a multitude of other devices, including a video camera, GPS receiver or an MP3 player with a microSD slot such as SanDisk’s Sansa players.”

“Flash memory cards have increased in storage capacity, but even an 8GB card may be too small for anyone with GPS map data, a few movies, a game or two, a presentation file and other applications.”

Greengart said 16GB gives consumers the ability to carry their digital content with them and still have room to do more with their mobile phones.”