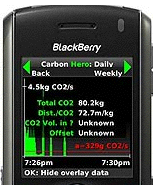 A London based start-up company has developed a range of software for mobile handsets that utilises global positioning in order to identify whether you are walking, driving or flying and then calculate the extent to which you are damaging the environment.

The product has been fittingly named ‘Carbon Diem’ and uses GPS in order to measure the speed and pattern of a user’s movement, and in turn identify the means by which they are traveling, thus calculating the level of carbon dioxide they have emitted.

Andreas Zachariah, creator and CEO of the Carbon Hero company, said that keeping a constant diary of harmful emissions enables users to keep track of their impact on the ozone and change their habits if they so wish.

"We’re facilitating people to make little changes and allow those changes to be noted, registered and possibly shared," said Zachariah.

The product has been tested using Nokia and Blackberry handsets. In response to privacy concerns, Zachariah has assured consumers that software can only identify the transport used, and not the route.

The development comes at a time when T-mobile announces their intentions to include a carbon calculator within its Android range called Ecorio.

UK consumers ‘far from ready’ for buying software in the cloud

Nokia N900 out in December