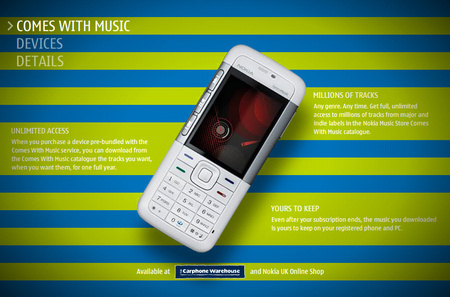 We don’t know why we’re getting all these press releases at the end of a busy day, but apparently Nokia has launched its "pioneering ‘Comes With Music’" service today. We’re supposed to be in the pub now for some leaving drinks, so knock yourself out with the press release below…

Nokia Remix, London, United Kingdom and Singapore–  At the Nokia Remix event held today in London and Singapore, Nokia announced the debut of its pioneering Comes With Music digital entertainment service which offers consumers a new way to discover and enjoy music. Customers who buy a Comes With Music
device will be able to explore and enjoy a diverse catalogue of music of international and local artists with unlimited access to millions of tracks for a year, keeping the music once the year is over and revolutionising their digital music experience.

"Comes With Music sets a precedent for consumer value and convenience that the rest of the digital entertainment industry is already copying," said Tero Ojanperä, executive vice president and head of the Nokia
entertainment and communities business. "Trying out a music recommendation is spontaneous as customers can download without worrying about the cost of an album or a track – the freedom and simplicity of the service is unparalleled. And Comes With Music gives you unlimited access to the millions of tracks in the Nokia Music Store and the music is all yours to keep – because it’s not a revolution unless you get to keep your music."

Comes With Music offers one year of unlimited access to the entire Nokia Music Store catalogue and
customers can keep all the music that they have downloaded at the end of the year to continue enjoying their music collection. Comes With Music will be available across a range of Nokia devices, including the new Nokia 5800 XpressMusic – also announced today and the Nokia N95 8GB and Nokia 5310 XpressMusic. With more than 10 million units sold globally since its introduction last year, the Nokia 5310 XpressMusic is the best selling music phone in the world.

EMI Music has joined as the latest major label to support Comes With Music.

"With the launch of Nokia’s Comes With Music, fans now have a new avenue to find and enjoy music from EMI’s catalogue, and our artists have a powerful new way to reach their fans," said Douglas Merrill, president, digital business, for EMI Music. "By encouraging music discovery in an innovative and consumer-friendly
environment, Comes With Music will continue to push experimentation in the digital music industry."

The United Kingdom will be the first market to offer Comes With Music, with sales planned to start on October 16, 2008. The Nokia 5310 XpressMusic Comes With Music edition is expected to cost £129.95 and people can pre-register their orders for Comes With Music devices from the Carphone Warehouse.