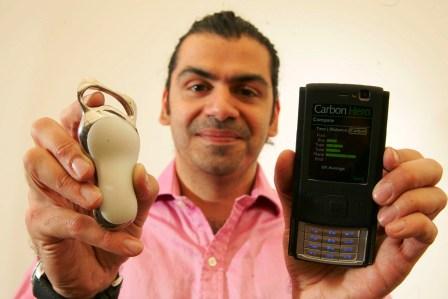 A London based start-up company has developed mobile phone software
that uses GPS in order to find out if you are walking, driving or
flying and then work out how much you are damaging the environment.

The product, fittingly named ‘Carbon Diem’, uses GPS to measure the
speed and pattern of a user’s movement and in turn identify the means
by which they are travelling, this then calculates the level of carbon
dioxide emitted.

Creator, Andreas Zachariah, chief executive of the Carbon Hero Company,
claimed that Carbon Diem is the first ever Carbon calculator for mobile
phones. Keeping a constant diary of harmful emissions, the user can
keep check of their impact on the atmosphere and change their habits if
necessary.

"We’re facilitating people to make little changes and allow those
changes to be noted, registered and possibly shared," said Zachariah.

Zachariah felt that major organisations could benefit from the
software, helping them to reduce their environmental impact and improve
their overall ethics. In response to privacy concerns, Zachariah
assured consumers that software can only identify the transport used
and not the route.

The European Space Agency (ESA) has given the Carbon Diem software a
regional award in its European Satellite navigation competition.

The development coincides with the news that T-mobile is set to
include a carbon calculator within their Android range called Ecorio.