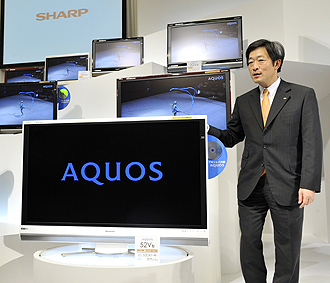 Sharp has created a combination more deadly than any button mash in Mortal Combat. With combo systems having been around since the days of VHS, it was only a matter of time before someone slipped a BD player in there.

Sharp’s new Aquos DX range of LCD TVs is the first to bundle a television with an internal Blu-ray drive. The electronics company has already surpassed mere Blu-ray playback, mind – with a recorder that will allow folk to capture high-def and SD content onto blank Blu-ray discs.

This technology hasn’t only been shoved into a screen big enough to satisfy The Hulk. Sure, there are 52in and 46in models, but the range of 16 different televisions goes right down to 26in. All the larger models offer 1080p resolution, while the 32in and 26in models make do with 720p.

What does this development mean in reality? Well, Blu-ray and TV control with a single remote is obviously standard. The same can already be achieved with other brands such as Sony, as long as all your kit comes from them. An optical output also lets you output the audio to a home cinema set-up and other HD sources won’t be left behind thanks to two extra HDMI inputs.

“What’s the catch?” we hear the cynics ask. Unfortunately, the sets are only confirmed for Japan so far. With announced prices putting the 52in model at around £2,800 and the 26in version at around £955, hopefully that pesky credit crunch won’t be around forever.