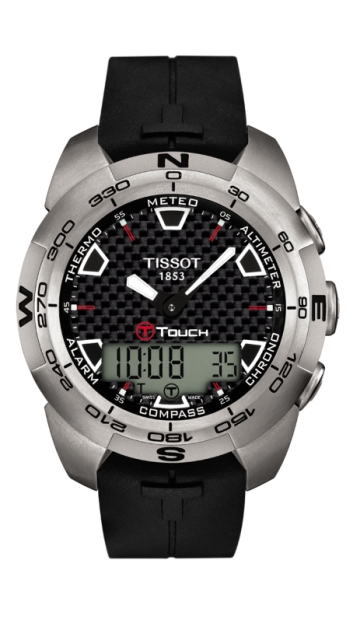 Every since Q handed Roger Moore a watch that could blow stuff up in Moonraker, we’ve wanted more than a simple timepiece. And while Tissot’s T-Touch might not help you dispose of a tricky padlock and save you from death-by-space shuttle, it could help you out in other ways…

Quite a few other ways, in fact. To get the most out of this timepiece you’ll want to do more than simply pop to work and home again and the T-Touch actually makes us want to get out and about on a regular basis.

That’s thanks to its in-built electronic compass, an altimeter, a temperature gauge and even a weather notification feature. If you’re not hanging off the side of a mountain at some point, you’re not doing this baby justice (it also has a timer and an alarm for those less exciting days).

Those who have stayed clear of touchscreen phones and other devices can put away their fears now. The features on the T-Touch are a cinch to work thanks to a simple button system. Touch the large T button situated at 3pm and then touch one of the six words printed around the edge of the screen to open that function. Need the hands to go back to their positions? Touch the centre of the screen.

So, what exactly can the T-Touch do? Well, the Meteo function acts as a barometer and shows weather changes via the hands. If they point to the left of midday up to six minutes it means the weather is deteriorating, if they point to the right of the figure 12 up to six points it means things are getting better. At the same time, the digital display shows the current pressure.

Continuing clockwise, next up is the altimeter. This shows the current height above sea level (92m on the fourth floor where we’re currently sitting). This feature can also be used to measure the rise or fall in altitude over a period of time and show your average ascent or descent time in meters per minute or feet per minute.

Our favourite feature is the compass. Set this going and the hands will point the way North (they can even be set to show true North, to cut out the mini adjustment usually needed and help make navigation that little bit simpler). You can confuse this feature by going on the London Underground: whack it on and it goes spin-crazy. Sadly the tube doesn’t do the same… The alarm does what you’d expect – beep at the time you’ve set it. We have a minor bone to pick with this, because there’s only 30 seconds of bleeping and no snooze button. We like our kip and that’s probably not long enough to wake us up fully, even if we do happen to be sleeping on the side of a mountain.

The penultimate feature is Chrono. This is the stopwatch funtion, with up to one-hundredth of a second accuracy. Even here Tissot hasn’t gone beyond offering the most basic version and there’s the option to record cumulative and split time readings.

Last but not least, the Thermo option measures – you guessed it – temperature. However, the metal will be affected by contact with your skin (you can see this in action when you turn it on and hold it in your clenched hand – the temperature visibly rises). Tissot suggests taking it off for 20 minutes before taking a measurement to get an accurate reading. That’s being a bit conservative and in practice it worked after just a few minutes off the wrist, so to speak.

All of which is fine, but is this a rerun of the ’80s calculator watch – plenty of useful functions but you might as well wear a sandwichboard sign with the words GEEK on the front and KICK ME on the back? Thankfully, it’s all packed into a very attractive package. As Richard Kiel – Bond villain Jaws from the aforementioned Moonraker – would likely say, it’s “a real man’s watch”.

So, the big question is, how much are you going to have to scrape together in these credit crunch times to bag all this technology? And the answer is £515. Or, as we like to think of it, the cost of a two-week package holiday. It’s hard to encourage you to spend that much at the moment if you’re not going to get the best out of all these features. But Christmas is on the way so hopefully Santa can pull one out of the bag and make the sportier types among us very happy this year.