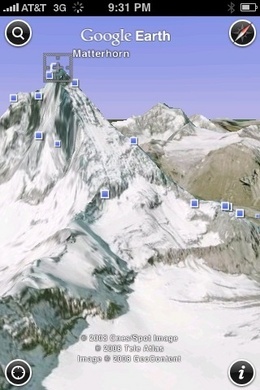 It’s taken its time, but Google’s famed photo-atlas has finally made it onto Apple’s iPhone and iPod touch.

The original application has been downloaded onto more than 400 million desktops since its 2005 release, and has become the definitive map app.

The iPhone version isn’t quite up to the speed of its computer-based cousin – currently on version 1.0.0, it does offer 18 languages, most of the original’s features and both 3G and Wi-Fi connections, but misses a few tricks like road markings.

Also, Brazilian and Argentinean iPhone users claim they can’t download the application, which can be found on Apple’s App store, at all.

The programme also uses a few iPhone-specific tricks, like utilising the set’s built-in accelerometers to let users change the viewing angle by tilting their phone.

“With Google Earth you get to the full detail page for businesses, so you can get reviews, photos, user content, business hours, and other useful information,” proclaimed a post on Google’s blog, which also included a video demo.

“We also added a ‘search near me’ feature, so with one touch you can find businesses near your location, without having to navigate there first or type in the name of the city.