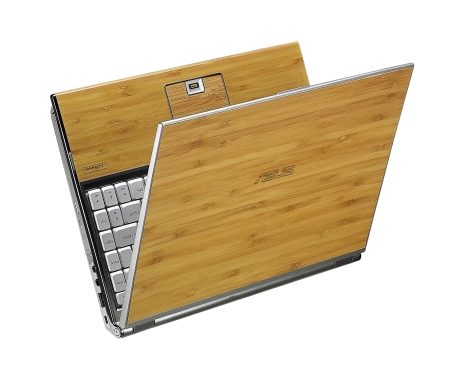 Laptops made of wood? Sounds like a throwaway idea in an eco-aware sci-fi novel. But Asus has made it a reality with the launch of the Bamboo Series Notebook.

Previously showcased as a concept model earlier in the year, the lappie is encased entirely in Bamboo in what Asus describes as "a seamless marriage of art and engineering".

"The release of the Bamboo Series notebook signals the coming of age of green technologies no longer confined to a conceptual realm but instead implementable on a mass scale, and is already attracting imitators in its wake," said an Asus statement.

The "striking design" is achieved using artisan-grade Moso bamboo panelling that’s crafted with the precision and care typically associated with bamboo instruments and arts and crafts.

"The organic tactility, refreshing scent and minimalist aesthetics of bamboo lend themselves to the Asus Bamboo Series notebook in the form of warmth and an old world charm that traditional synthetic materials and cold metals will struggle to replicate," said the Asus statement, sounding like a Guardian-reading estate agent.

"As users touch the notebook they will be able to sense an immediate familiarity much like running their fingerprints (sic) across furniture."

Asus said that even the touch pad, which is made from genuine bamboo fibre patterns, provides a sense of being close to nature.

Each Asus Bamboo series notebook has a unique natural patterning and colour treatments can be applied or distinctive designs etched by laser for further individualism.

The unit is also very energy efficient thanks to the Asus Super Hybrid Engine technology, which is a product of comprehensive redesigning of the hardware, software and BIOS by Asus’s top engineers.

That allows full control over performance levels and can result in a battery life extension of between 35 per cent and 70 per cent in comparison to other notebooks of the same specification.

Don’t expect the wood to be a poor substitute for metal and hardened plastics, though.

Asus says the bamboo rivals the tensile strength of many metal materials – even steel – with an incredible resilience.

And production materials aren’t in short supply thanks to bamboo’s renewal rate of 60cm growth within just 24 hours.

"Able to regenerate itself upon harvesting without the need for necessitating or replanting, Bamboo is possibly the perfect renewable resource," the Asus suit said.

The Asus Bamboo Series notebook is available in two versions – a 12.1-inch model weighing 1.57kg and an 11.1-inch version weighing 1.25kg. Both house Intel Core2 Duo processors and are fitted with DDRII RAM.

The Bamboo Series notebooks will retail for an SRP of £1,349 including VAT.