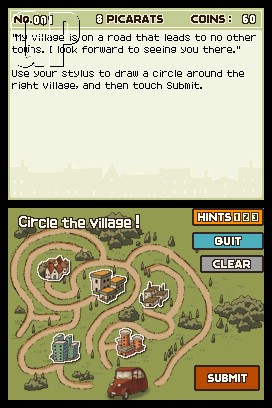 Layton appears, at first glance, to be an old-fashioned point-and-clicker. But it deceives… It’s really one of those books of brainteasers you get at train stations, dollied up with nice graphics and various bits to fiddle with.

The whole aesthetic of the game is gorgeous, mind. Developers Level-5 (normally more at home crafting gigantic RPGs like Rogue Galaxy
and Dragon Quest VIII) have gone for a look that bridges the gap between Studio Ghibli’s movies and cult French flick Belleville Rendez-vous. The result is stunning, helped along by cartoon cut-scenes (from Production IG, which also provided the cut-scenes for Wario Land: The Shake Dimension) that wouldn’t look out of place on the cinema screen.

The plot sees the titular Professor and his assistant Luke travel to the very mysterious village of St Mystere in an attempt to solve the very mysterious mystery of the Golden Apple, the key to a recently deceased baron’s fortune. The baron was a puzzle fan, so there are plenty of puzzles barring the way to the cash. The villagers are all puzzle fans, so they bombard Layton and Luke with puzzles at every opportunity. Layton and Luke both enjoy puzzling, so they set puzzles for each other at the slightest provocation. Sometimes there are puzzles hidden in the scenery. Basically, there’s a lot of puzzling. They’re not normally very well integrated into the story, which is a shame, although a gleefully ridiculous plot twist near the end clears this up somewhat.


The puzzles themselves eschew the usual basic environment traps or “USE yoghurt ON glow-worm” nonsense you often find in adventure games. Devised by puzzle supremo Professor Akira Tago, they take classic forms – matchstick pictures, logic puzzles, riddles, maths problems, spot-the-differences, jigsaws, chess puzzles and more. Ranging from stupid-easy to stupid-hard, there’s a whacking 120 of them crammed in to the cart, with a new one available to download every week for the enthusiastic/masochistic.

The game’s very considerate towards helping you solve them – you only need to crack 82 to see the end sequence, and of those only about 20 are unskippable: you can choose which of the rest to solve, provided you can find them. Additionally, you can buy up to three hints for each one, once you find the “hint coins” hidden in the landscape. There are also other bits to keep you occupied, namely piecing together an old painting, building a robotic dog and furnishing the heroes’ rooms at the inn. Solve puzzles, get goodies. It’s a nice extra incentive.


As you’ve probably guessed, whether you’ll enjoy Layton depends on whether you enjoy puzzles. We here at Absolute Gadget are moderately fond of them, and as such the game proved a delight most of the time, but the harder ones also served to make it pretty irritating occasionally.

It’s worth checking out regardless, if only for Layton himself – the quintessential Victorian gentleman in a top hat, complete with outrageously moustachioed nemesis, he’s instantly one of gaming’s great heroes. Of course, if you are a puzzle freak, you’ll be in hog heaven – and happy to know the sequel’s on the way.