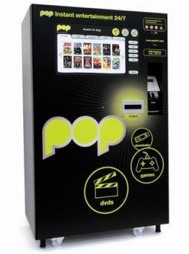 Sony and Universal Pictures have raised their elemental rings and, their powers combined, have summoned Captain Planet! By which we mean they “are planning to release vending machines that distribute PS3 games, Blu-Ray discs and music downloads.”

The PoP “entertainment vending machine” was shown off at the Stuff Live Expo, and has absolutely nothing to do with the Prince of Persia (aside from presumably selling his new game when it comes out).

It will cheerily gobble up your sweet, sweet monies or credit cards and spit out PS3 titles and Blu-Ray movies in return 24/7.

Or, if plain old discs aren’t futuristic enough for you, slap in an MP3/MP4 player, SD card or most other USB devices and get music and movies brought to you via mysterious science (i.e. downloads).

Rumour has it, too, that you can check a trailer on the touchscreen before parting with your hard-earned, to make sure you buy the movie/game you want.

The companies have promised 150 movies to be available from launch (including Hellboy II and, uh, Mama Mia), but specs for the other media remain unknown. Also unknown is whether DRM will prove a factor in the whole shebang, and which file formats downloaders can choose from.

The PoP unit is making its world debut in Britain, so don’t be too surprised if the initial stock need a bit of fine-tuning when they first appear – which is, apparently, “soon”…