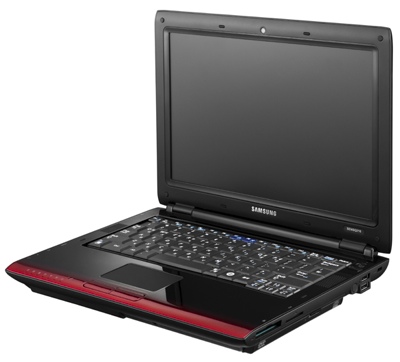 You would think that with everyone punting a netbook, the market for
fully-functional yet small laptops would be on the wane. Thankfully, Samsung has a light laptop that doesn’t compromise on power or looks.

As a successor to its much heralded Q70, the Q210 is light (weighing
under 2kg) but still manages to cram in a 12.1-inch display. Also,
thanks to the Centrino 2 technology under the hood, it can manage to
make Vista run pretty well. In fact, aside from the red colouring along
the side, it doesn’t look that much different.

While the red splash may not be to everyone’s taste, it certainly gives
it a different look from the standard vanilla notebooks. Also, it is
quite glossy looking and that goes for the display as well. We thought
that we’d have some trouble reading the display in bright sunlight, but
our fears were unfounded, the display works remarkably well in broad
daylight, so we did have to retreat indoors to use the lappy. We didn’t
have any problems with the viewing angle of the Samsung Q210.

Using the keyboard is a joy on the Q210. It has a proper feel (unlike
some netbooks we’ve tried). The only gripe here is that when trying to
use the shift key, we kept on depressing the slash key instead, so this
took a bit of getting used to.

The Q210 is among the first laptops to use Intel’s Centrino 2
technology. Inside it sports a new 2.26GHz P8400 Core 2 Duo processor.
And to go with the chip, there is 3GB of high-speed DDR2 RAM. The PM45
chipset used by the Samsung Q210 features a speedy 1,066MHz front-side
bus. If you don’t understand that, be assured that it will make
everything run that wee-bit faster on Windows Vista.

For gamers, it can ust about hold its head up. It comes with a 256MB
Nvidia GeForce 9200M graphics adaptor so it can cope with most games
and their onerous hardware requirements.

The laptop also comes with a D-Sub out so you can connect it to an
external display or projector. There is also an HDMI port so it can
hook up to an HD television as well.

It has a nice, big 320GB hard drive attached, so there is room for
storing HD content. Sadly, the Q210 doesn’t come with a Blu-Ray drive,
so it would seem that the HDMI port may not be fully-utilised by the
laptop. It does, however, come with DVD burner and that sports the HP
Lghtscribe technology so you can burn an image onto the disc you have
just recorded onto (as long as you have a suitable disc).

As for wireless, it comes with not just 802.11 b and g but also n as well. Bluetooth complements the wireless features.

We were also impressed by how long the battery lasts. Our test managed to squeeze six hours use before require more juice.

Overall, this is one of the finest laptops to grace our offices and we
will truly be sad to see it go. It waltzes through everyday tasks and
manages to paly the odd 3D game well. It is truly a multimedia computer
and a decent enough desktop replacement should you consider it.