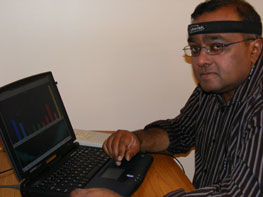 Now admittedly we can get a bit lazy around the Absolute Gadget office. We’d really want a fridge that throws beer to you
instead of getting up and fetching one yourself. But wouldn’t it be
great if you could write all those emails and articles without having
to tap away at a keyboard just by thinking – it would save us a lot of
effort. Thankfully, boffins at the University of Portmouth have done
just that.

The device, which fits around the user’s forehead, was developed by Dr Paul Gnanayutham from the university.

The alice band worn around the head picks up brain waves
(Electroencephalography or EEG), muscles (Electromyography or EEG) and
eye movements (Electrooculorgraphy or EOG) signals at the forehead.

These signals are then fed into an amplifier which can cut out external
noise and listen only to the bio-potentials of the person wearing the
electrodes and then to the serial port, so the computer just sees the
brain-body interface as the cursor’s control.

While it is not the first the first time scientists have found a way of using a person’s brain
waves to navigate a cursor but Dr Gnanayutham’s is one of the first to
be used on real people with serious brain injuries, rather than
confined to a laboratory and tested on the able-bodied.

"I worked with traumatic brain-injured participants who were
paraplegics, non-verbal and tube-fed to give them a voice and the
ability to say ‘yes’ or ‘no’ on a computer screen by using their
bio-potentials," said Dr. Gnanayutham.

"Learning how to navigate using their facial muscles or brainwaves
isn’t easy and can take months. I worked for eight months with one
young man who hadn’t communicated after his brain stem was broken in an
accident. His mother knew he was ‘there’ and wasn’t giving up on her
son but there had been no sign, no movement, nothing until he started
using the brain wave system," he said.

Gnanayutham said that the man turned out to be very angry.

"He didn’t want his father to
visit but had been unable to say so; his fiancée visited him but became
increasingly distant as she went on with her life; only his mother and
one nurse felt he was trying to communicate with them. It is the
patience of very few people – those who really love or care for a
person like this – who make the difference. If it hadn’t been for the
man’s mother and one nurse who were sure he was trying to communicate
he would have been ignored.

He said that one of the problems with giving patient a voice is
that many healthcare staff and even families of brain injured victims
don’t
want the patient to be given a voice.

"It is easier to care for them and
keep them fed and clean if they don’t have the power to express a
preference, to complain or ask for things to be done differently."

He said he made it practical so it can be used by anyone. "It is not for a
laboratory experiment; it works for real people with locked in syndrome
and gives them a voice."

The doctor is now looking for funding to turn it into a product that can bought and used without expert help.