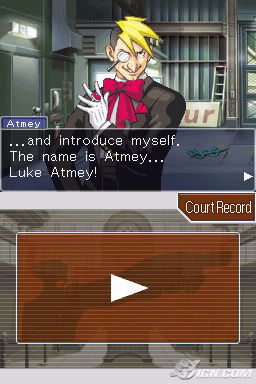 This
review may be a couple of weeks late, but then the game was over a year
late so hey. This third title in Capcom’s smash-hit Ace Attorney series
was delayed due to censorship issues over a suicide scene, to the point
where it was actually beaten to the shops by its sequel, Apollo
Justice.

Anyway, if you haven’t had the pleasure, the Ace Attorneys are a series
of adventure games casting you as a defence lawyer. You scope out crime
scenes, talk to people and gather evidence in the classic
point-n’-click style, then head to the courtroom and use your evidence
to poke holes in witnesses’ statements, until the truth comes out. The
games have been a surprise success due to their original gameplay
style, complex plots and famously witty/pun-loving scripts. (Who could
say no to a series with a detective named Dick Gumshoe?)

If
you needed that explanation, though, Trials ain’t for you. The Attorney
series is more like a TV show than anything else, and Trials is the
third series where all the odds and ends get tied up in a neat package,
with old characters returning and long-standing secrets revealed,
before the reinvention for the fourth game (the aforementioned Apollo
stars a new lead character, and is the first in the series designed
specifically for the DS – the first three are ports of Japan-only Game
Boy Advance titles). {mospagebreak}You’ll still be able to make your way through if
this is your first go at the series, but you won’t get half as much
satisfaction as a long-term fan who knows and loves ditzy medium Maya
Fey, pompous-but-decent-really prosecutor Miles Edgeworth, perennial
loser Larry Butz or, of course, perma-flustered Phoenix himself.

Trials
brings nothing new to the Attorney playing field, which is both a
blessing and a curse. The mix of adventuring and outsmarting witnesses
remains as satisfying as ever, but it’s still very linear. The bizarre
leaps of logic that blighted the last game, Justice for All, have
thankfully been given short shrift, but instead it seems easier than
ever to present a piece of evidence too early and get penalised for no
good reason (the second case is especially good at this). The tutorial case is a flashback to Mia’s rookie days, which is a nice touch

{mospagebreak}Some headway
has been made in that you can often present several different pieces of
evidence to make the same point, which goes some way to acknowledging
that every player’s mind works differently, but it’s not really enough.
Still, the courtroom scenes are more forgiving than either of the two
prequels, so Capcom are learning. The game is still ultra-lo-fi, but
the stilted figures overlaid on detailed backgrounds remain oddly
charming, and the tinny melodies are as catchy as ever. As mentioned,
the plot is excellent, even for this series’ high standards – twisting,
gripping and clever.

Trials is easily the best
Ace Attorney game thus far, but it’s not really worth it if you’re not
already a fan. Thus, buy, play and love the first two, and then come
back to this. It’s worth the effort. Your new nemesis has the best theme tune ever