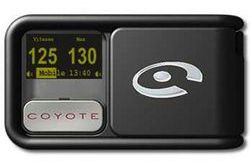 Gadgets that warn you about speed cameras have been about for years
now, but they do rely on knowing the location of these Gatso devices
prior to you heading out on a journey. Now motorists using a new device
can now alert other drivers about a speedtrap simply by pressing a
button.

Exploiting a grey area of the law, the Mini Coyote alerts other
vehicles using the same device in 10 seconds by pressing a button on
the dashboard gadget.

The gadget transmits the location of the trap to a processing centre
via a GSM/GPRS connection and this it then relayed to other drivers.
The Mini Coyote sounds an alarm and flashes a colour-coded alarm to
alert the driver to how often the trap has been reported, the car’s
speed and distance to the camera.

The gadget is said to help spot mobile camera units that are often not part of a database of camera sites.

The speed camera spotter is made by French company Novus and 50,000 French drivers have successfully used the unit to avoid getting a speeding fine (by slowing down of course).

Police officers sometimes give warnings to motorist that warn others of
speed trap but few prosecutions have ever been successful.

Experts reckon that the device exploits a legal grey area.

"This appears to exploit a loophole in the law as many other
real-time speed camera detectors that detect police radar and laser
systems are soon to banned under the Road safety Act 2006," said a spokesperson for the Environmental Transport Association (ETA).