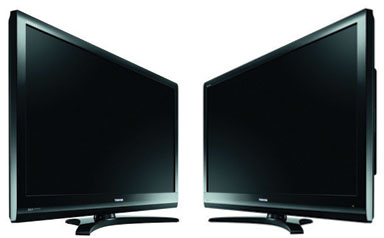 Toshiba haven’t taken losing the format war lying down.
It sometimes looks like the company is fighting a guerilla war against
the mighty Sony. We say that because it has brought out a new range of
televisions that claim to upscale normal standard definition television
pictures and DVD movies to near-HD quality.

The new Regza ZV
series of goggle boxes were unveiled sometime ago at the IFA show in
August. The new tellies use a Quad Core HD processor (or Spursengine)
to make a HD silk purse out of the sow’s ear that is Freeview (well
actually BBC One is always good quality – it’s the other channels that
try to play bandwidth sardines). This Spurs Engine is based on technology found in the
Cell processor of a PS3.

That said it is capable of displaying
normal HD pictures from a suitable source with its 1920 x1080
resolution. The TVs come in either 42-inch and 46-inch models in gloss
back and a stand. Input-wise, it sports three HDMI slots, Component
Video, S-Video and a D-Sub connection for PCs.

For gamers
there is something called Game Mode technology. This is a direct
channel for two-way communication between the TV and games consoles
which should cut down time lags, improves response times and ensures
smoother gaming.