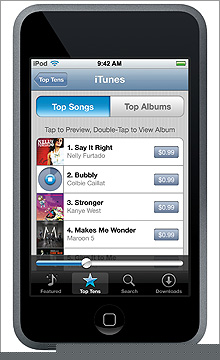 You can
throw away your beloved Nintendo DS and bin your Sony PSP and as for a
Nokia N-Gage phone don’t even think about it. Well according to some
Apple guy you might as well do that as he believes that the iPod Touch
is the future of handheld gaming.

In an interview with Stuff magazine,
Greg Jozwiak, Apple’s Vice-President of Product Marketing, said that
there were many more games available for the touchscreen iPod through
its App Store than games for Sony and Nintendo’s handhelds.

"There
are over 1,500 games already available for the iPod Touch and iPhone.
That’s more than the PSP and DS put together… they range all the way
from casual to big time action games. This is where we are, less than
four months into it. Squint your eyes and imagine where we will be in
six months time, or a year," said Jozwiak.

He also reckoned that
the Touch has better graphics than the DS as well as sporting
multitouch, an accelerometer and a larger screen

All this
combined really makes us a big competitor in this market… We think
we’ll leave a lot of people scrambling to see how they’re going to
compete. A lot of our competitors have recognised this and thought ‘uh
oh’," boasted the Apple man.

He also pointed out that games were cheaper typically costing £6 compared to £25 for the rival consoles.

He didn’t stop with the handheld market leaders. He turn his ire to the Nokia N-Gage.

"I think if you ask most people, they don’t know what it is," he said cheekily.

Thems words are fighting talk. We expect to hear from spokespeople from Nintendo and Sony quite soon. Maybe even Nokia.