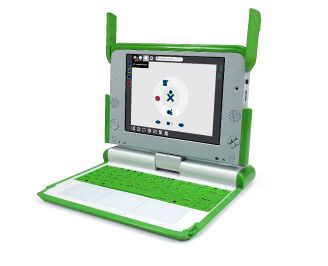 For some reason those in the know think that every child in the third
world needs a laptop (presumably to play World of Warcraft and buy a
new book from Amazon). And who are we to disagree. That aside, everyone
here in the UK loves a netbook and the tiny, weeny XO laptop will finally be
available in Europe.

The catch is when you buy one for yourself you have to buy another for
a poor child else where in the world. (Not so much a catch really,
we’re just being tightwads).

The launch is being run by the G1G1 (Give One, Get One) charity
programme. The scheme has already been running in the US with some
success since its launch there in November 2007. The cost of the laptop
scheme there is $199.

The expected price in the UK is expected to be £254. The programme will launch across the UK and Europe on 17 November on a minisite run by online retailing giant Amazon.

The OLPC organisation is expecting to launch a second generation laptop
with a touchscreen and no physical keyboard, but no date has been set.

One Laptop Per Child project finally kicks off