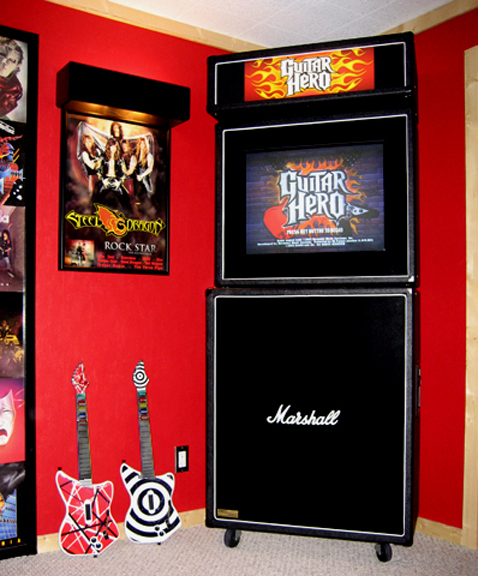 It’s
been a rumour touted round for a while, but it looks like an arcade
version of the world-swallowing Guitar Hero series is on its way.

Game
site Bemanistyle.com has been chatting with "a very reliable source",
who told them that Raw Thrills have been working on the project, which
will apparently be unveiled at the International Association of
Amusement Parks and Attractions, which kicks off in Orlando tomorrow.

In
a weird-but-understandable turn of events, the source went on to say
that the cabinet will be published not by GH’s owners,
Activision-Blizzard, but rather the Metal Gear Solid and Silent Hill
creators, Konami. Konami, of course, practically invented the
rhythm-action genre that Guitar Hero belongs to with its Bemani series
– Dance Dance Revolution, DrumMania, and, most importantly,
GuitarFreaks, which Hero owes a lot to (check out Lost in Translation –
when Scarlett Johansson’s wandering through the arcade, the teenage
punk is impressing his girlfriend with his GuitarFreaks prowess).

According
to the source, the arcade cabinet will feature 8-10 speakers, a 32"
monitor and more than 500 LEDs. Even more intriguingly, it will
allegedly feature an Internet link to provide online cash tournaments,
starting next year.

(We should point out that this picture is a fan-made cabinet, but hopefully in 24 hours we’ll be able to see the real thing.)