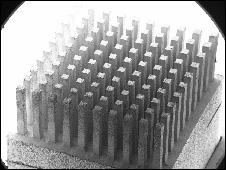 We
just loved the Six Million Dollar Man when it was on in the seventies,
so it’s good to see that scientists in Wales have the technology to
rebuild astronauts involved in crashes.

The
sensor, which contains 100 tiny needles, can be fitted to specific
parts of the brain responsible for movement and can relay nerve
impulses straight to false limbs in order for them to respond.

The
engineers were contacted by Utah University to create the sensors in
tungsten carbide for its bionic implant research project. The tungsten
carbide is extremely tough and conducts electricity.

The needles
are thin enough and long enough to penetrate the brain safely to pick
up signals from the brain. These signals are then amplified and
transmitted to the prosthetic limbs, producing movement.

Patients
with the implant then learn to move the limb by generating the correct
brain signal. According to Dr Robert Hoyle, from MicroBridge Services,
the results are encouraging.

"The researchers in Utah have had patients controlling simple
mechanical operations like gripping objects with the prosthetic limbs
or operating a mouse," he told the BBC.

He said that the next challenge was to get more needls on the sensor as
this would increase the control a patient has over their false limb.

In the long term, the researchers want to make a sensor that sits on
the spinal column of somebody who has broken their neck so they could
learn to move their own limbs again.