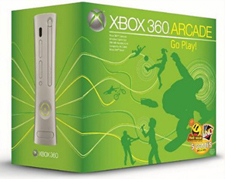 With the launch of Microsoft dashboard upgrade to the Xbox 360 hours
away, Microsoft is celebrating the launch by giving away points and
selling dirt-cheap Xbox hard drives.

The console manufacturer will make the New Xbox Experience update live
in a few hours and to mark the occasion, the company is to give away a
million Microsoft Points that can be used to buy downloadable games and
movies.Xbox LIVE members in the US, Canada, Singapore and the UK who
buy either a movie, TV show, XBLA game, Xbox
Original or DLC will be entered into the competition draw.

One lucky gamer could walk away with 500,000 points (and presumably
never have to shell out cold, hard cash to buy Xbox content ever again).

Up to 46 gamers could win prizes and Microsoft has more details on the prize draw on its website.

As the new update takes up 128MB of space, the company has made
available a tempting offer to owners of the diskless Arcade version of
the console.

For £20/$30, Microsoft is punting a "refurbished" 20GB Xbox 360
console. The offer also comes with three months subscription to the
LIVE service, so gamers can start downloading movies and shows to their
"new" old HDD. Presumably, the drive come from all those Xboxes that
suffered the Red Ring of Death.

The company has a website up and running with details of the hard drive offer and an avatar that looks surprisingly like James May from Top Gear fame.