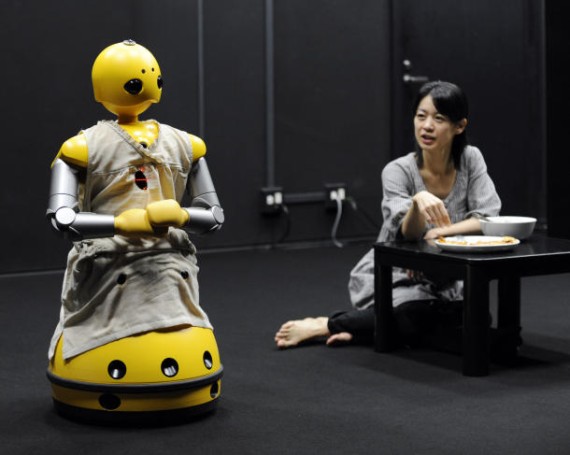 As anyone
who watches Futurama knows, in the future some of the finest
actors around will be robots. The first steps towards this glorious
tomorrow have been taken, as the first robot-human theatre production
has had its premiere. And to absolutely no-one’s surprise,
it’s the work of the Japanese.

Hataraku
Watashi (I, Worker), by Oriza Hirata, took its bow at
Osaka University. Set in the near future, it tells of a young couple
with two housekeeping robots, one of which loses its motivation to
work, complaining about its boring job and discussing its place in
its owners’ lives with them.

The robots
(one of which is pictured in rehearsals with human co-star Minako
Inoue) are made by Mitsubishi. The model is already used as a
mechanical house-sitter, but the two acting droids were built
especially for the production. It took two months for workers at the
university to develop the acting programme, which makes the robots
speak lines and move around the stage.

Hirata
says the work is intended to raise questions about the relationships
between humans and technology, and hopes to expand it from its
current 20-minute running time to a full-length production by 2010.

Rumours
that Mitsubishi are now working on a real-life version of Calculon
were sadly made up by us just now. But we can dream…