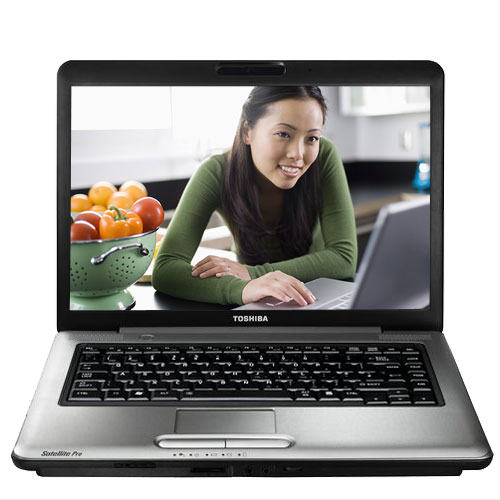 Toshiba has always had some pretty good laptops and has been in the
game a good few years for good reason – they work! So would the new
Satellite Pro A300D powered by an AMD Puma processor deliver the good?

The unassuming-looking laptop features an AMD Turion X2 Ultra ZM-80 processor running at 2.1GHz for each of the dual cores.

The display is good and bright enough, it has to be said that this is a
business laptop so won’t feature the screaming graphical capability
that gaming laptops would sport. Also, it has onboard graphics (ATI
Radeon 3100 shared video memory) instead of a dedicated grahics chipset.

It has a reasonalby spacious 250GB hard drive, so will be able to take
your iTunes folder (hopefully you won’t have too many HD movies to
store on this).

Sound is about average. Despite the stereo speakers and the Dolby Sound Room technology, we thought that just about performed.

Connectivity-wise, it ticks the boxes with wireless b and g (sadly not
n specification), and Gigabit Ethernet. There is also a 5-in-1 card
reader and a DVD +/- RW and +/- DL superdrive. There is also a good
1.3-megapixel webcam to make those important internet video calls.

As far as the operating system is concerned, it comes with Windows
Vista Business, bu can be downgraded to Windows XP Professional (which
is a good idea as Vista Business seems to take forever to load up).

The Lithium-ion battery claimes to give 2.25 hours of life before requiring a charge.

Overall, this laptop is functional rather than exciting and at around
£500 is clearly aimed at the business market. Ideally, these types of
laptops should be designed to be a lot lighter as most business people
have to lug these things around airports and business trips.