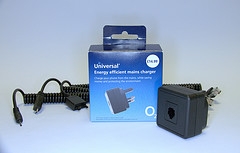 Leaving your mobile phone charger plugged in once it’s charged is bad for the environment, as we reported when we reviewed Nokia’s green 3110 phone. O2 now claims to be the first UK operator to be offering an energy efficient mobile phone charger that fits a number of different handsets.

It will be available at an introductory discounted price of £7.49 when purchased with an O2 handset until 31st December 2008.

Additional connection cables are available for £4.99.

Stats wise, the new charger helps because:
* The O2 Universal Charger is amongst the most energy efficient in the UK cutting energy consumption by as much as 70 per cent compared to standard mobile phone chargers (thanks to a 70 per cent improvement over the EnergyStar benchmark).
* Heat loss from the charger has also been eliminated, another source of significant energy loss from standard mobile chargers.
* It will cut power when battery fully charged potentially saving Brits over £30m a year (based on the total value of energy saved with Universal Charger over 12 months multiplied by the 73m mobile phones in use in the UK).
* O2 estimates that by cutting off the unneeded charge to mobile phones, the Universal Charger could save the equivalent carbon emissions of over 36,000 cars per annum.