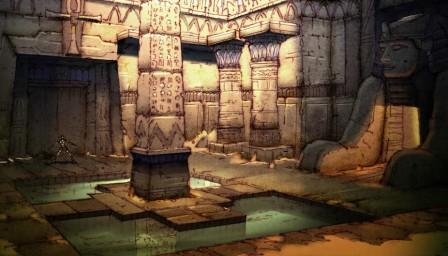 We’ll
give you a moment for that mental image to sink in, then explain that
Tomb Raider bods Eidos is in a financial pickle, and the
leading competitors for takeover bids are Warner Bros. and Final
Fantasy fellows Square Enix.

SE have
been looking to make an impact on Western markets with titles that
aren’t Final Fantasy or Kingdom Hearts, and
Eidos’ range (Hitman, Commandos, Thief and
Deus Ex as well as Ms Croft) make them a tasty target.

WB already
own 20 per cent of the English publishers, so they’re the obvious
frontrunners for a takeover. SE’s late entry into the contest
is clearly something they’re taking seriously, though –
head honcho Yoichi Wada has already visited Danish developers IO
Interactive (the Hitman guys), who are owned by Eidos, for a
chat, and is planning to jet over to England to talk to the company’s
bigwigs.

So could
we be seeing Kingdom Hearts 3, where Goofy, Donald Duck and
Lara Croft team up to fight Sephiroth in Hundred Acre Wood? Stranger
things have happened. Not many, though.

Tomb Raider gets Steam-powered on PC