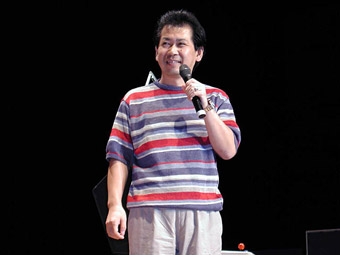 That’s
what Yu Suzuki wants, anyway. The Sega legend who brought the world
OutRun, Virtua Fighter, Shenmue, Hang-On,
Virtua Cop, Space Harrier and about a billion others
has been in pensive mood about the future of videogaming tech, and
fancies getting all Neo on our collective backsides.

Suzuki was being interviewed for the book Arcade Mania: The Turbo-Charged
World of Japan’s Game Centers when he mused on the
possibility of new ways of interacting with games. Kotaku ran an
extract of the interview:

"In
medicine, you have artificial heart devices, or people that have some
sort of chips in their bodies, to be able to keep track of vital
signs. So, it doesn’t have to be a scary thing, but you could put a
sensor here" (points to his arm). "You know, a bit like
in The Matrix

.It’s
not really something only in the future, some people already have
them, chips in their bodies. If for some that would be a bit too
scary, then you could also do something more simple, like using
wristbands or a pendant. So using devices like these for sensing
would be good I think. I think that for arcade games I want something
that’s a bit futuristic."

Scary? Cool? A bit of
both (scrool)? We sez the last. Considering that Suzuki is arguably
the biggest name in coin-op gaming, we’d recommend keeping an
eye on this idea.