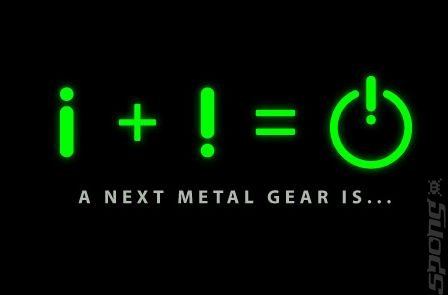 You have to hand it to
Konami, it certainly knows how to whip gamers up into a frenzy with the
slightest of effort. Its new teaser regarding Metal Gear Solid has made
the gaming community ponder its significance.

A picture on its website
depicts an upside-down exclaimation mark, a plus sign and an upright
exclamation mark on one side of an equals sign. To the right is a power
button. Underneath is a phrase "A NEXT METAL GEAR IS…"

Some
have said that the power sign related to a Xbox 360 button. This could
mean the once Playstation-exclusive game franchise heading over to the
Microsoft console for its next outing. Although this theory does seem
far-fetched. But Microsoft is more than keen to see the game on its
console.

Others have said the upside-down mark is in fact an "i" and this
relates to the iPhone (which has the makings of a handheld games
console.

Metal Gear creator Hideo Kojima is set to unveil his
next gaming masterpiece with the odd that it will be at the Tokyo Game
Show. Watch this space.