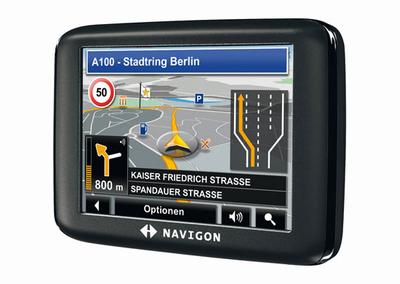 Satnavs still aren’t that cheap really (well compared to a £5.99 road
map of Great Britain you can buy from most service stations) but
Navigon is aiming to lower the price bar with its new 1210 without
stinting on features.

The satnav itself will set you back a credit crunching £83 ex VAT which
is a lot cheaper that the TomTom Go 730 but should we expect the bare
basics of getting you from A to B?

The device itself is little. Measuring 95mm by 72mm by 17mm, it will
easily slip into a purse or handbag. It also comes with a charger and a
mounting device for attaching it to a windscreen.

The device takes time to start up so it is best to switch it on while
ou do other things, such as belt up small crying children in the back
and load up the boot. That said, when it does initialise it reveals a
host of features that should only be present in a device twice its
price. It carries maps of the whole of Europe as well as speed camera
warnings and lane assistance.

This is particularly good as a lot of satnavs seem to forget to tell
you which lane you are in only to nag you when miss your turning.

{mospagebreak}In our test it seemed to take a long time to pick up satelite signal
around our way but when it did find it, it never lost it. The screen is
just about big enough to read but you do have to mount it mid screen,
any further away and you might have trouble reading the thing. The
voice commands are very good and clear and timely.

As we said earlier it is very tiny in comparison to other satnavs on
the market so will easily fit in the glove compartment or your pocket
if needs be.

Where the satnav falls down is that the tiny screen can make entering
in a street or place hard to do. It makes this not so easy to use as
say the TomTom One. the user interface can also seem at times to be a
little to hard to understand and this has mean that casual use for
finding a nearby street becomes out of the question if time is
pressing. The Navigon device also doesn’t have the ability to upgarde
it with TMC to receive traffic info over FM radio.

That said, it is very good for the money and once you have got used to it and its foibles it is OK to use.