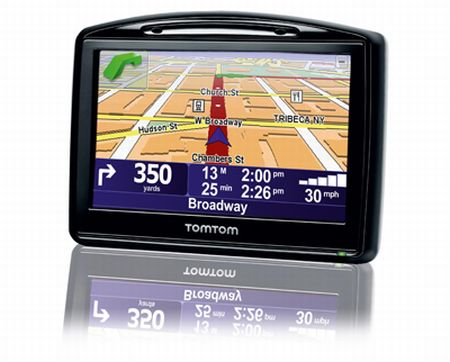 TomTom’s Go 730 has been a fixture in Terry (our little Nissan Micra) for some time, but has also helped guide The Fighting Cocks on their European tour and travelled to America with two Absolute Gadget veterans. So, how does this road botherer measure up?

Well, it’s always nice when can take something out of the box and use it immediately, as you can with the TomTom Go 730. But while you can drive this sucker right out of the box, we suggest taking it for a spin on your computer first. Connecting to the TomTom Home service provides map updates, including the latest user-generated information from an army of amateur updaters in TomTom’s Map Share community.

When you are ready to travel, navigation instructions can be as vague as a city centre for your intended destination or as precise as a postcode. The device also remembers recent destinations if you don’t want to type in all the details again and these can be saved as favourites for continued use. Routes can even be input using voice commands if you want to get fancy (or have the kind of job where you never want to stop the car).

Once you’ve decided where you’re going, the route is planned using TomTom’s IQ Routes technology. This uses real average speeds that have been measured on roads, instead of static maximum speeds for the different road types. So instead of assuming you’ll be doing 70mph on the M25 during rush hour, the TomTom Go 730 knows you’re much likely to be doing less and factors that into the journey time estimate to make it as realistic as possible. TomTom believes its IQ Routes technology is good enough to save drivers time – and expensive fuel – in almost half of all journeys.

However, if you think the route that’s been offered is not good enough, there are further steps you can take. Pressing the Find Alternative button gives you the freedom to miss out a particular road or area, which is essential if there’s been a closure or you just fancy avoiding a blockage.

This revew was posted using the IPassConnect global wireless and US 3G service. For more details visit the iPass website.

Your driving skills also get a boost thanks to TomTom’s Advance Lane Navigation. Sounds a bit complicated, you’re probably thinking? Well, in reality it’s just a nudge to be in the right lane for your next turning, so you won’t be the lemon trying to edge into busy traffic to avoid missing an off ramp. In many cases this nudge is in the form of a very easy to understand image showing exactly which lanes will turn off and which will go the wrong way.

The onscreen map also shows points of interest (POIs) such as gas stations and cash points, with the option to change what is displayed. This is also backed up by an excellent search function that can track down nearby petrol stations, for example, should you suddenly realize the fuel gauge is low.

OK, that’s a lot of help for the average driver (and we include ourselves in that group). But, as they say on 99 per cent of US infomercials, “Wait! There’s more…” Turn on the Bluetooth setting on your phone and you can use the Go 730 for hands-free calling. Handily, that phone connection can also be used to provide you with up-to-date traffic information.

So, the downsides… Well, while the sucker that holds the main device in place is pretty sturdy and up to the job, the mini-suckers that are supposed to hold the stringy aerial in place on your screen tend to fall off. Thankfully, the reception when you simply lay the cable over the front of your dash behind the steering wheel is excellent without any elevation being needed.

And whoever sets the city centre information for TomTom’s maps has a funny idea about what the centre of something is. While you might expect to find yourself in a useful area (Main Street in most American towns) or somewhere with a bit of life or shops, navigating to the centre of a town often sees you wind up in a nondescript street instead.

So, should you buy a TomTom Go Series satnav? Well, if you don’t like arguing with the person who would otherwise be reading the maps and you like being able to find services and shops around you without wasting time, the £294 price tag on TomTom.com is a no-brainer. If you favour the journey rather than the arrival, then keep missing that lane change and we’ll see you later.