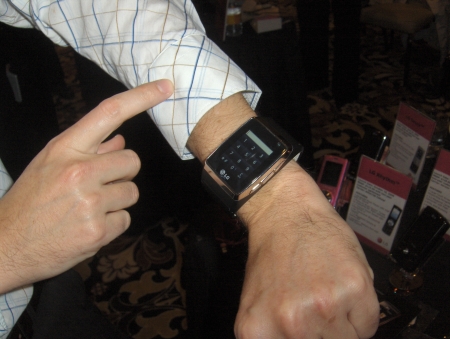 LG is better known for making those yummy Chocolate phones that look nicer than they taste (euuugghhhh, crunchy). But the company’s latest chatbox isn’t going to fill you up between meals – although it could tell you when it’s time to eat.

Yes, the latest LG blabber box is also a timepiece.

We got a quick look at the wristwatch at CES (the PR guy allowed us to take a photo as he demonstrated it for us, but was not going to remove it from his wrist for a second).

Don’t worry, though. You only have to wait until April-June to get your mitts on one – even if we don’t know how much that’ll cost you yet.

So, how does it work? Well, it’s a quad band GSM phone that has a speaker built in so you can chat directly into it.

Alternatively you can yak in stereo or mono using a Bluetooth headset.

To switch between function, simply run your finger over the touchscreen a bit like you would with a HTC phone.

We’re not psychic, but we expect these to be extremely popular when they finally hit the shelves.