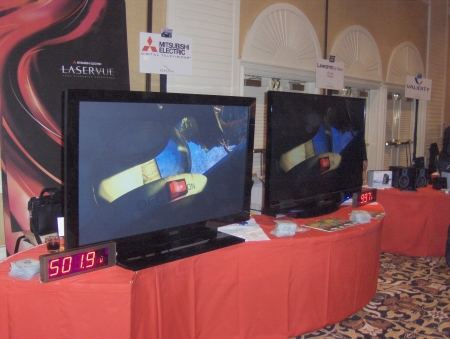 A 60-inch plasma TV muscled next to a 65-inch LaserVue television. Surely the bigger screen will burn more electricity? Not so, according to a test by Mitsubishi.

In fact, according to sensors, when the picture is very bright the 65-inch Mitsubishi LaserVue TV uses only a fourth of the electricity of a slightly smaller plasma screen. And occasionally that figure reaches five times as much.

In fact, the LaserVue from Mitsubishi’s Digital Division normally uses less power than a light bulb to use its three different coloured lasers to create the same images.

However, the PR girl admits that the middle of the screen is still the best place to be.

“The centre is still the best viewing angle,” she told Absolute Gadget. “Even though they have improved it.”

The LaserVue biggie is also not the slimmest screen ever, although compared with the kind of legacy models that hog an entire corner of a room it is not what you’d call a fattie.


This news story was posted using the IPassConnect global wireless and US 3G service. For more details visit the iPass website.