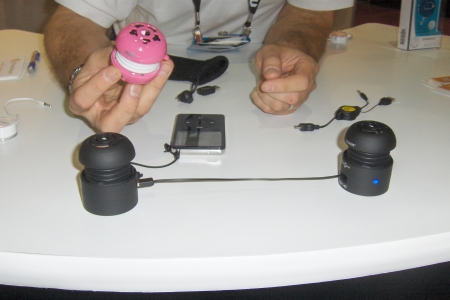 No-one can tell you better than a couple of travellers on a three-month road trip that you need to pack light. And if these tiny speakers had been available at the time we left, we might have traded our Logitech Pure-Fi Anywhere 2 dock in for them.

As it happens, these Tweakers won’t be available in US branches of Office Depot until February or March.

So what will you be getting when they are released? Well, a tiny bundle that looks like an egg.

But, when you pull the magnetically fitted two halves apart things start to take shape.

A retractable cable in one speaker connects to the other. This can also be used to top up the lithium battery inside, with a one hour charge giving the unit five to six hours playback at full volume.

A retractable cable in the other speaker then connects to the MP3 player or other device, using a standard 3.5mm jack.

That’s not all, though. Pop the lid up on both speakers and they gain just a little bit more bass.