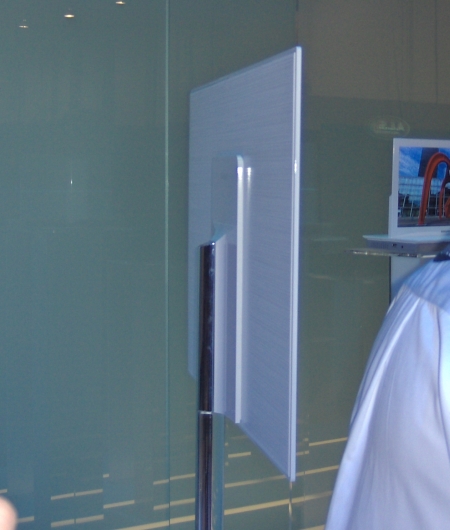 TV envy. If you’re prone to glaring at your neighbour as he fits a mammoth flatscreen to his livingroom wall, then Las Vegas’ Consumer Electronics Show is no place for you. Mainly because you’d want to kill the people at Samsung’s giant high-def stall…

First up on the oh-my-god-I-have-to-have-one-of-those scale is a super-slim screen that uses LED technology.

Shown off under Samsung’s Luxia LED TV brand, this prototype is slimmer than an LCD telly.

If you’re wondering where the input is, it’s hidden away in the stand.

And the science bit? Well, conventional LCD TVs have a panel on top of a diffuser sheet, on top of a fluorescent lamp that’s on top of a reflector.

Samsung’s Luxia LED TV sheds some weight by having a panel on top of a diffuser sheet, sitting on a Light Guide Plate that’s on top of an LED module.

Naturally, being a prototype it’s not available in any shops. But we want one all the same…

This news story was posted using the IPassConnect global wireless and US 3G service. For more details visit the iPass website. {mospagebreak}


The company also showed off a number of other prototype screens.

The one in the middle is a Samsung 31-inch OLED screen, while the others surrounding it use the same technology but are around 21-inches.