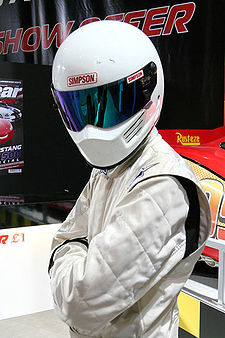 Something that has excited
viewers of BBC’s Top Gear over the years is the identity of its tame
racing drive The Stig. Well, one newspaper has got enticingly near to
finding out just who is underneath that white helmet.

While the News of the World failed to the person’s actual name, it did however reveal more titbits about the man’s life.

The driver once had a shot at becoming a Formula One racing driver and lives in a £300,000 pound home (which is about average).

Other
shocking details are that he is married, earns around £150,000 from Top
Gear and other stunt driving jobs. But he still only drives a £15,000
car.

The current Stig replaced Perry McCarthy in 2003 who was the show’s first Stig. The
paper managed to get hold of the leak from the BBC show.

On next page – who really is the Stig…

{mospagebreak}After all this
all we know some say "Who is the Stig?" is a pretty popular search term
on the internet. Other say that Ben Collins sounds a lot like the Stig.

Link: Who is the Stig?