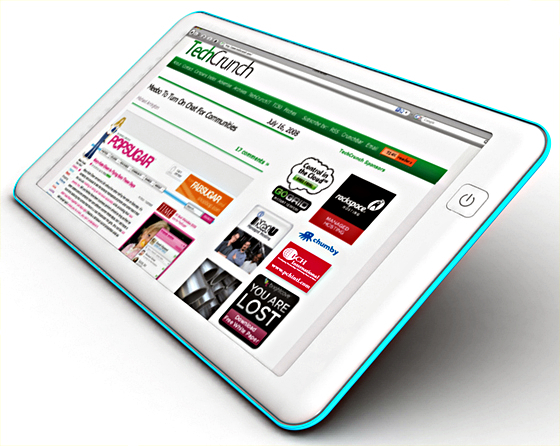 It’s not everyday that gadget news websites go off and make their own
hardware (although the Absolute Gadget thinking toaster is on the
cards), but TechCrunch is well on its way to developing a touchscreen
table PC for a dollar under $300.

The website have shown a working prototype, dubbed the CrunchPad, running Ubuntu Linux.

TechCruch head honcho Michael Arrington said he had gotten tired of
waiting  for a cheap OLPC-style device and decided to work on his own
one.

A posting on TechCruch’s website suggested that the tablet device is well on its way to completion.

The table computer has a 12-inch touch screen display with a resolution
of 1024×768. It features a Via Nano processor, 1GB of memory and a 4GB
flash drive for the operating system. It includes wifi, an
accelerometer, a camera and a four cell battery.

While it has a full working version of Ubuntu Linux installed, it boots
straight into a webkit-based browser. Software for the device is being
developed by Fusion Garage, a Singapore based group.

Arrington said that he is working on drivers for the device as well as a fully-functional virtual keyboard.

The projest is now got a team leader, Louis Monier, who was the founder
and CTO of AltaVista. The team has been working with Fusion Garage, Dynacept (who designed the case) and Via to produce prototype. More about the CrunchPad on the video below