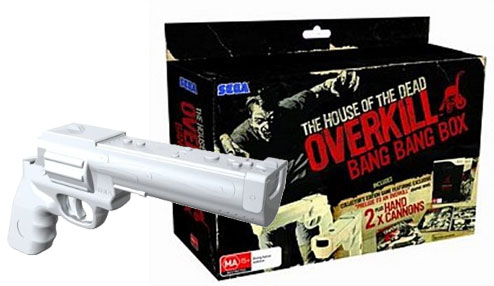 The Wii is
well-placed for lightgun shooters. Only Sega seems to have noticed
this, with Ghost Squad and The House of the Dead 2 & 3
Return.

The Wii
needs a better lightgun shell than Nintendo’s official Zapper
add-on. The usual suspects (Thrustmaster, Logic3 et al) have noticed
this, but their efforts haven’t quite cracked it.

Sega is
releasing the first console-specific House of the Dead game,
Overkill, on Wii this year. With its grindhouse aesthetic and
tongue entered firmly into rotting cheek, it’s causing a bit of
a buzz. So it seems like the done thing to unveil Sega’s own
attempt to craft the ultimate Wii lightgun – the Hand Cannon.
And blimey, look at it.

The shell
itself is lovingly made by peripheral makers Venom, and is available
for pre-order via Amazon.co.uk. Australian Wii owners get to show
off even more via the pictured Bang Bang Box (2 Hand Cannons and the
special edition of the game), which seems to be down-under only at
the moment.

Americans
are a bit twitchy about lightguns for obvious reasons, so the Hand
Cannon probably won’t be hopping over the pond. We look
forward to U.S. citizens being forced to import from Britain rather
than the other way round for once.

Related articles
Is this Nokia gun phone for real?